This is my space to document adventure.

In December 2014, after spending many months trying to figure out what kind of life we wanted to lead, where we wanted to go, how we wanted to live, my husband and I made a decision. Neither of us was happy in our current conventional life, so why stay? Why be ordinary when there is the possibility of more?

We decided to hike the Pacific Crest Trail. And, at the end of our journey, stay out west –going wherever it leads.

This isn’t a hiker blog with lots of stats or gear lists, because there are already plenty of great ones out there by hikers that know much more than I (See below for some links).

This blog itself is under constant revision. In its current form it is a place to share new adventures as seen through the eyes of our toddler and ourselves.

A little more about us

We are avid hikers who met, started hiking and adventuring together, fell in love, and haven’t stopped. We got married in July, 2014, hiking into our small ceremony by a waterfall. We’re both native Mainers (although Catie isn’t officially, since she moved here when she was 7). We spent the last four years in Washington State but are now back in our home state of Maine with our 2-year-old daughter in tow.

Catie (Comet) is a freelance writer. Find her other writings at catiejoycebulay.com, and connect with her on Twitter @catiejoycebulay or Instagram @catesway.

Jason (Not-a-Bear) is my partner in crime, and void of a social media presence. Before he closed his practice, he was a lawyer in a rural Maine community.  Jason completed the Appalachian Trail in 1999. After the PCT he found his way back to land conservation and worked  as the Conservation Director of Blue Mountain Land Trust. He now works for the Maine for Land’s Future Program. 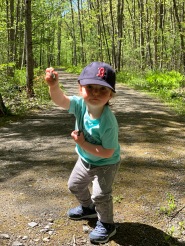 ily (Alarm Clock) is our almost-two-year-old who, so far, seems to love a good hike as much as we do. Whether on foot or in a hiking pack, she’s learning her way around a trail, searching out blue blazes and enjoying little moments of curiosity along the way.

“Yeah runnin’ down a dream

That never would come to me

Workin’ on a mystery, goin’ wherever it leads

Runnin’ down a dream”

You can read more about our decision to thru-hike the PCT here: Saying Yes to the Trail.

Here are some blogs that get more into the nitty-gritty of the PCT and that I enjoyed reading as I planned my own trip: