On this stretch our daily mileages were 26, 26, 27, 19; motivated by warmth and shelter. We knew if we did two marathon-length days out of White Pass, on the second night we could stay in a cabin, maintained by a local snowmobile club. It was warm, with a wood stove, wonderful after most of the day in cold, clouds, and wind. Sharing the loft with a bunch of other hikers lined up in our sleeping bags wasn’t the best night’s sleep, with all the sleeping pad noises, farts, and snores, but it was warm.

Then the next day, we pushed to do 27, because some southbounders had told us about an abandoned weather station, with electricity, lights, place to charge phones. (Though we didn’t end up staying inside since there were no trespass signs and it was a little creepy and smelly. The weather wasn’t too bad that night.)

Then that only left us with 19 miles into Snoqualmie Pass today. At which point we have completed 90 percent of the trail, mileage-wise, and we will complete the last 10 percent  in the next two weeks!

Two more weeks! It feels like I have been waiting forever to say that! We are at the point now where we just want to be done. It’s already been a long journey.

They were all long hard days partially because of the terrain, a lot more up and down than we’d gotten used to in Oregon, but mostly because of the weather, which ranged from cold and cloudy, to misting, to pouring rain, to snow and hail. But, my feet didn’t hurt (well, just in the typical walking all day way, not the awful screaming at me way they had been). And that I am so grateful for, it makes a huge difference. Unfortunately, Jason’s are starting to bother him a little more though.

Washington has been a little coy with us thus far, only revealing parts of itself. The corridor within the fog we have gotten to see has been quite beautiful, but I know there is even more beauty hidden beyond those clouds. We went through Mt. Rainier National Park a few days ago without seeing even a glimpse of Mt. Rainier. The week before, it was Mt. St. Helen that slipped from our sight (although, we did see it from a distance one day in Oregon).

the clouds parted just enough to let on a snow cap, at one point I saw more snow behind it, perhaps Rainier? 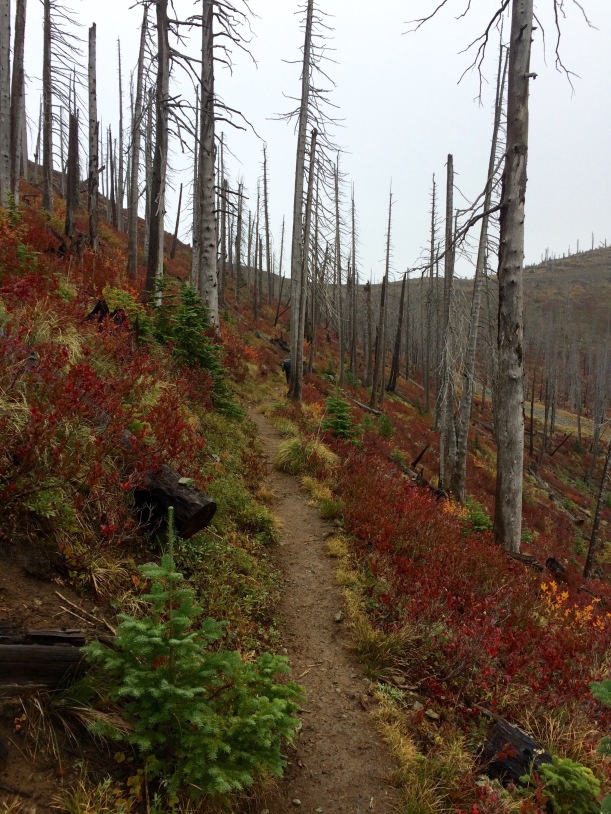 fall colors brighten up a burn area a bit

So, we have not had any encounters with the archetypical scary wild animals yet this trip (though we did possibly see a mountain lion on the trail from a distance back in Northern California, but we didn’t bother it and it didn’t bother us). We have however encountered archetypical cute animals acting not so cute. You’ll recall our deer story from earlier in the trip, now we have birds to add to it. There is a certain kind of bird (points if you can identify it for us) that likes to swoop down and visit during lunch and dinner breaks, getting aggressively close to us and our food bags. The other night, one swooped out of nowhere and landed on Jason’s hand holding his last bite of peanut butter and cheese tortilla. The bird didn’t get it, but after bird claws land on your dinner you don’t really want to eat it any more.

Here’s a picture of the same type of bird in Oregon hauling off a brownie someone had dropped. Do you know what kind?

Moral of the story: don’t feed the animals!

But do feed the thru hikers. The other day we were enjoying our second lunch by a cooler of trail magic. A father and son pull up on the dirt road near the trail. They approach us slowly and quietly, as if we are the wildlife. The father asks us the usual slew of questions, then they take off back to their truck.

We continue sipping our orange sodas and eating our cheezits, and a few minutes later they both return, the son shyly hiding behind his father, and the man gives us a couple fruit roll ups that he explains his son wanted to give us, very sweet.

Being a thru hiker gives you this new weird status. Sometimes you are treated like a wild animal, like walking down the road today, a car visibly slowed to stare at us. While others think you are doing something so wonderful (which I don’t really feel like we are), and they stop to tell you. It’s probably the closest I’ll get to feeling like a celebrity.

And one last thought of the day before I go to bed: Smells. It’s not true what they say, that you stop smelling yourself after a while. I think my sense of smell has actually heightened somehow. True, I don’t smell me all the time, but I know I stink, especially when our feet and our clothes and gear are  wet; we smell even worse.

But also the wonderful fall smells are in the air now, really my favorite time of year to hike, as long as the weather is being kind. So many different types of plants, all smelling differently–sweet firs, crisp drying leaves, plants that smell like herbs I can’t name.

And other hikers. There is a huge difference between a thru hiker and day hiker. I can smell the day hiker. I smell their laundry detergent, their soap, their shampoo, their lotion, women and men.  It’s really quite amazing, I never noticed how many different smells are on us.

So, now it is time for bed. We heard through the PCT rumor mill (yes, it’s as big as any small town’s) that the large section of trail that was closed due to fire has reopened, for better or for worse. We’ll confirm it tomorrow after the holiday on the PCTA’s web site. But we only have 268 miles left! Compared to the 2,390 we’ve done that doesn’t sound too bad! And the weather forecast has sun in it for the next ten days! 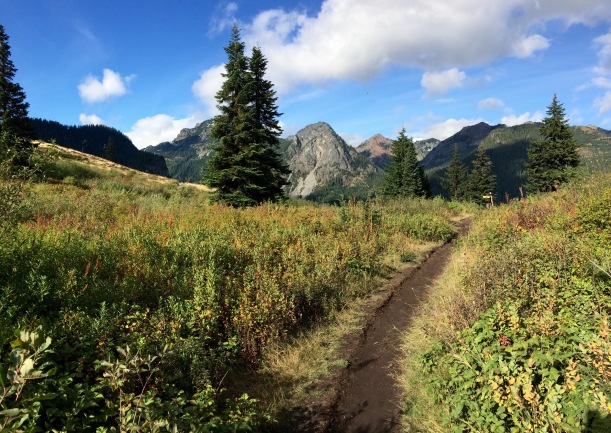 Washington sun finally showong itself today, headed into Snowqualmie, you can barely make out the chair lifts to the left

Trying something new at 4 and 42! This is my birthday selfie and of course I can’t resist a pic of this creative cutie. She’s been very particular about her and, by extension, my art-making lately but I finally discovered a way for us both to create on our own terms—brought my easel down into her craft space so she can’t reach my painting 🤣 still some kinks to work out, like having to reach down to the floor to rinse my brush and my palette balancing on the exercise bike 😬 but overall a lot of fun. #kidart #acrylicpainting #motherdaughterart
I think I’m in love 😍 First beginner wheel throwing class @wtvlcreates Ticonic Studios. There’s a lot I could say about beginnings but I’ll leave it at that. #beginersmind #claythrowing #wheelthrowing
❤️ this girl. Had the most fantastic weekend with her.
Day 31 #carvedecember2022 Joy. My focus word moving into 2023. Whew, I had a lot more I wanted to say but 2022 is exiting with a bang 🤮 I’ll just leave it at that. Happy New Year 💜 loved this #carvedecember challenge. Thank you @balzerdesigns